A new variant of Redmi Note 10S has been teased. This variant is of purple color, the quad-camera setup is also visible on its back as it was in the regular variant of this phone. Let us tell you the rest of the details of this phone.

A purple color variant of Redmi Note 10S has surfaced. This phone has been teased on Xiaomi’s global Twitter handle . The original variant of this phone has been launched globally in March and in India in May. Specifications of this variant are expected to be similar to the old models. However, the company has not yet given any official information about the launch and availability of this variant. 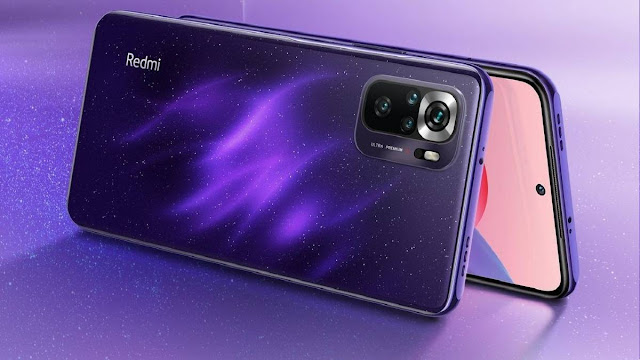 n the picture of this new purple variant, it is seen that a punch-hole display has been given in it. On its rear side, a brilliant designing is seen in purple color, which will probably be with glass finishing. At the bottom is the Redmi logo. On the top left corner, a rectangular module is seen with a quad camera setup with an LED flash, whose sensors will probably be the same as the regular variant.

Talking about the specifications of Redmi Note 10S, the company has given a 6.43-inch Full HD + AMOLED screen in this phone , which has an aspect ratio of 20: 9. This phone comes with Helio G95 chipset, which comes with up to 8GB of RAM and 128GB of storage capacity. Its storage can also be increased with the help of external SD card. A fingerprint scanner has been given in the right side of this phone. It comes with MIUI 12.5 out of the box based on Android 11.

Quad rear camera setup has been given in this phone. Its first camera comes with 64MP and second camera with 8MP ultra wide angle lens. At the same time, its third and fourth camera comes with 2-2MP macro and depth sensor. This phone has a 13MP front camera for selfie and video calling. It has a 5000mAh battery, which comes with 33W fast charging support.