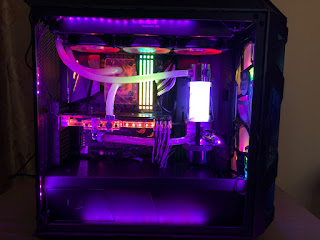 Recently I finished building off my personal build called Project Storm Shadow which is well a fully custom liquid cooled build made inside the Cooler Master H500M. As much as I loved creating this build it did brought out some interesting features and facts about this case which I thought are worth sharing in a build log cum FAQ guide which is dedicated solely to help certain people out there who plan to go for such build or just need a particular information regarding a particular feature.
Before we dive deep into this article I would like to clarify that while building this PC I came across little to no information about the points below which and that included reputed forums and even YouTube videos that made it all the while more difficult since none of them were accurate when it came to making a custom liquid cooling build though for general build with air cooler and AIOs there is plenty of useful information and reviews out there. This somewhat made my job quite difficult as I had to do a lot of research on the personal level and mix it with guess work with hopes that  it would work out just fine in the end. So I hope this article would serve a s one place stop for all the information that someone like me out there is and would be searching for.
Note – As this is an impromptu article so excuse me for the picture quality. 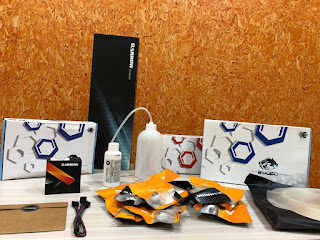 Storm Shadow is build with the sole purpose of performance at minimal cost without compromising upon quality. One more thing I kept in mind while sketching out the build is to make it as hassle free as possible when it comes to future maintenance of the loop hence, a soft tubing is what I went with which also helps me to upgrade atleast the CPU if not the motherboard in near future without tearing down the whole loop for a simple swap!
The vital configuration is as follows  –

In case most of you must be wondering that why have I used only one radiator and not two is pretty simple. For cooling a single CPU and GPU combo a single 45mm thick 360mm long radiator made out of copper is enough and anything more would yield diminishing returns but would surely make the build more complicated in ever way possible. My setup n this Indian summer where my ambient temperature mostly sits in at 30°C to 33°C without an air conditioner leaves my setup sitting at 52°C on the GPU and 63°C on the CPU which comes down my over 10°C when using an air conditioner!
With all of the basic explanation aside now lets get down to some FAQs

1. How much is the clearance for a radiator on top of the case? 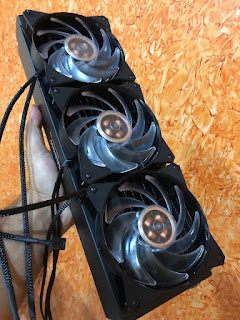 The Cooler Master H500M doesn’t have any clear explanation or information about this vital point. At most some would just say that its 34mm which is completely wrong infact its 70mm! Yes you read that right its 70mm on top. 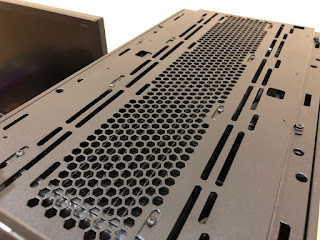 The top has a removable grill which you can take out and mount the radiator to and then screw it back on the chassis. The catch is that if you look closely then their are various grills for mounting at different potions wrt the radiator size, if you mount the radiator to the last line of grill from the left side as in the pic then you can mount a radiator which is upto 60mm thick and mount the fans on top in the empty chamber on top between the main chassis and the glass top or you can slide in a 45mm radiator like I have and put a set of 25mm fans below it. The latter which is my case even allows you to go for a push pull since you can mount fans on top of the case too under the glass top.
Note – A 360mm 46mm or 60mm thick radiator would only fit with with the inlet-outlet holes on the motherboard IO shield side and not towards the front of the case since the IO shield would interfere with the radiator hence making it impossible to slide it inside the case

2. What are the other possible radiator placements?

a. If its a slim 30mm radiator then you’ll be fine mounting it with the fans inside the case but this means that you would need to use atleast two radiators in case its a full loop cooling a GPU and CPU hence increasing the loop complexity unnecessarily but that’s subjective.
b. Opting for a 45mm or thicker radiator would mean either you remove the front 200mm stock fans and replace them with radiator fans which would then be sucking in fresh air but compromising the whole signature look of the H500M series as you can’t place those large 200mm fans in front anymore.
Or you can remove the HDD cage completely to make room for the radiator and fans to sit inside the case hence, sandwiching the radiator between the front 200mm fans and the radiator fans. This means you would compromise HDD storage completely making it either a full SSD system or you’ll need to use a NAS or something for large storage. 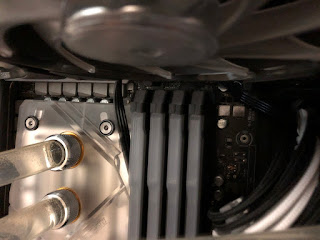 If you plan to do push pull or just push like me with a top 45mm radiator or just a pull with a 60mm thick radiator then make sure you don’t use any sort of an external RAM cooler or water block or even RAM sticks that tend to stick out at the DIMM retention clips.
In my case I am left with just enough space to open the RAM slot clips for swapping memory sticks if and when required. I use pretty standard sized Corsair Vengeance Pro RGB that are completely flat at their edges. RAM height won’t create any issues whatsoever though.

4. What is the Reservoir Clearance? 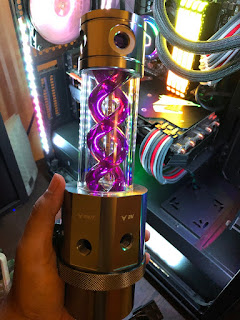 The case allows for around 13 inches of clearance from the top to the metal shroud but this length is shortened when you install a radiator, fans or both on top so subtract it accordingly. I opted for a reservoir and pump combo which measures in at 240mm of total height and I had to remove the pump mount bracket on top of the shroud to install it.
For installing a longer reservoir-pump combo say something like 310mm or so you will have to remove the HDD cage and the shroud completely hence posing the same issue as I’ve mentioned in the above answer.

The Cooler Master H500M comes with two dedicated reservoir mounts, one on the shroud and one on the side grill where the two SSD mounts also happen to be located. The one on the shroud is kind of useless when one is using a long graphics card such as myself as it’ll leave no space for the reservoir to stand on that mount. Maybe you can use it if you mount your graphics card vertically for which the case has provision readily out of the box. 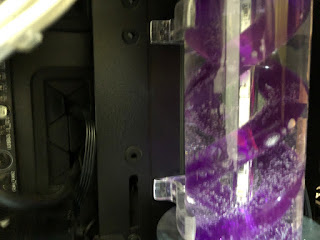 The grills on the side is what’s optimum if you ask me since you can mount the reservoir with the clips that most come with out of the box by simply screwing the clips into the rail from behind of the case like I have done in my build.
This way you won’t be compromising too much air flow coming from the front fans which you might have if mounting the reservoir in the front of the case using a bracket that you would have have to buy separately adding up extra cost unnecessarily.
On the downside you’ll compromise two SSD mounts but I suppose four should be plenty anyways that you’ll be left with.

6. Any issues with eat dissipation from the top since its solid glass? 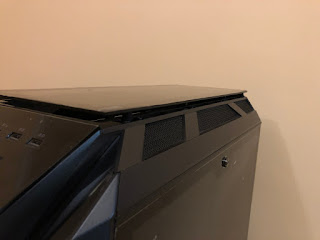 Yes, since the top is solid tempered glass on the H500M it won’t let hot air escape via the natural path that is hot air rises upwards instead the hot air will escape through the side grill which isn’t enough and this results in the radiator getting heat soaked leading to around 5°C-6°C rise on both the CPU and GPU if you take my case since both are cooled via the same radiator.
A simple way around is to either DIY a mesh panel for the top or just unscrewing the TG panel, taking out the four washers from the middle and then screwing the glass panel back with long head screws with the washers in between the glass and the top panel. This will create around 1cm of extra space letting hot air escape through and improving the temperatures by almost 4°C atleast depending upon your ambient temperature.