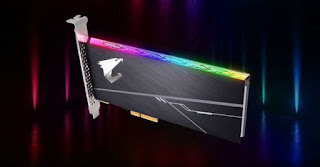 Gigabyte is rolling out a pair of solid state drives that will light up your PC with speedy performance. Offered under its Aorus brand and shipping (presumably soon) in the add-in card form factor, these new SSDs slide into a  PCIe 3.0 x4 port and deliver read and write speeds that are several times faster than SATA-based SSDs.

You may have heard about these drives before. That’s because Gigabyte first announced them at the Consumer Electronics Show in January. Now around three months later, it’s added product pages to its website for these new drives, and is expected to make them available soon.

The drives come in two capacities: 512GB and 1TB. Both are rated to offer up to 3,480MB/s of sequential read performance, though the 1TB model is the overall faster of the two. Here’s a look at the specs on the 1TB model:

And here are the specs on the 512GB model:

The specs on both models are comparable to Western Digital’s SN750, the best SSD for gaming in the NVMe space. The SN750 line is built around the more convenient M.2 form factor, though if you’re rocking an older motherboard that does not have an NVMe slot, AIC solutions like Gigabyte’s are an end-around to buying a new mobo.

It appears Gigabyte is also making an appeal to aesthetics. By going with an AIC form factor, it’s able to deliver a more flashy product, both in terms of RGB lighting and the design on the heat spreaders.

The other advantage Gigabyte is touting is temp control. According to Gigabyte, its double-sided heat spreader design kept temps at around 50C during internal testing. There are also thermal pads on both sides of the drive. Still, it’s a more cumbersome solution compared to M.2.

Gigabyte still has not said when its new drives will be available to buy or how much they will cost. Given that product pages now exist, we imagine they will ship soon.